The highly individual practice of American architect and designer Ken Isaacs (born 1927, Peoria, Illinois) challenged conventional definitions of modernism through designs that sought radical solutions to the spatial and environmental challenges of modern life. Fueled by the optimism that defined the postwar period, Isaacs began working with the new forms and technologies offered by modernism and advances in science, at the same time shunning the consumer-laden values of the American dream. The result was a lifelong commitment to a populist form of architecture that, because of its low cost and ease of construction, allowed a broad range of publics to participate in the design process.

These designs, all founded on Isaacs’s concept of the matrix or total environment, were built using a three-dimensional grid and took the form of modular units called Living Structures that unified the multiple functions of furniture and home, including nomadic, sustainable architectural dwellings or Microhouses. Isaacs also applied his matrix idea to various multimedia information systems, most notably The Knowledge Box (1962), which was re-created by Isaacs in 2009, an experimental learning chamber that eschewed the traditional classroom for “environmental” concepts of education.

An early apprenticeship in mechanical engineering combined with studies in cultural anthropology and information theory shaped Isaacs’s early interest in architecture and design. He developed his Matrix Research Project while a graduate student at Cranbrook Academy of Art in the early 1950s, where he also created his first Living Structure (1954) and later taught his Matrix Study Course. Isaacs also held academic positions at the Rhode Island School of Design and the Institute of Design, Illinois Institute of Technology, Chicago, where the original Knowledge Box was constructed. He is professor emeritus at the University of Illinois at Chicago, School of Architecture, where he taught architectural design and served for many years as director of graduate studies.

Isaacs’s work has achieved international acclaim and received considerable attention in both the popular press and within the media channels of the architecture and design communities. A prolific, prosaic, and opinionated writer, he is the author of several articles and two books: Culture Breakers, Alternatives and Other Numbers (1970), on his own design research, and How to Build Your Own Living Structures (1974), a DIY manual that details step-by-step instructions for building and adapting his constructions. He also served as a contributing editor for Popular Science from 1968 to 1972.

The following interview is a composite dialogue, a textual collage that combines passages from a conversation between Isaacs and myself that took place on September 9, 2014, in Granger, Indiana, and excerpts from the author’s own writings and other interviews. Revealed is an architect with a deep connection to the land of his Midwestern roots, and whose unwavering commitment to an experiential model of architecture, at once generative and generous, created a vernacular idiom of modernism that remains profoundly influential.

The following article appeared originally at http://mythologicalquarter.net/2011/08/29/living-structure-as-bar/ and is shared under terms of https://creativecommons.org/licenses/by-nc-sa/4.0/

We have written before about using the Ken Isaacs designed Living Structures system in our home.  The simple grid based system can be used as a starting point for necessary things from shelving to the construction of whole houses. Currently, a Living Structure inspired system is our bed/shelving, providing a more efficient use of space in our bedroom. We have also used the Living Structure system for building projects outside the home

This is a Living Structure inspired bar in the art space, print shop and work space we helped to found in Copenhagen’s Vesterbro neighborhood. The bar is made in large part from old pallets as well as store bought wood. The red shelving slats are made from scavenged road construction wood.

Here in Copenhagen, when the city is doing a road construction project, these wooden slats are placed around the construction site to keep people away. They often break and are left behind. We gathered a lot of wood this way to make the shelves on the bar.

This is a bar and thus bar-shaped. So, it does not completely follow Isaacs’s Matrix system, the building block of the Living Structure design based on interlocking squares. It stretches out into more of a rectangle. It is inspired by the Isaacs’s system, however, because we kept the flexibility measures of the original Living Structure design. Such as, the evenly space holes for adding more shelving, or for moving existing shelving around. For some finishing touches to this design project, Brett added a light underneath the bar and we coated it all with water proof shellac after painting.

We are interested in shaping the spaces we inhabit with flexible design that maximizes both space use and material use. We keep coming back to the Living Structure system to inspire design solutions that fulfill these needs. 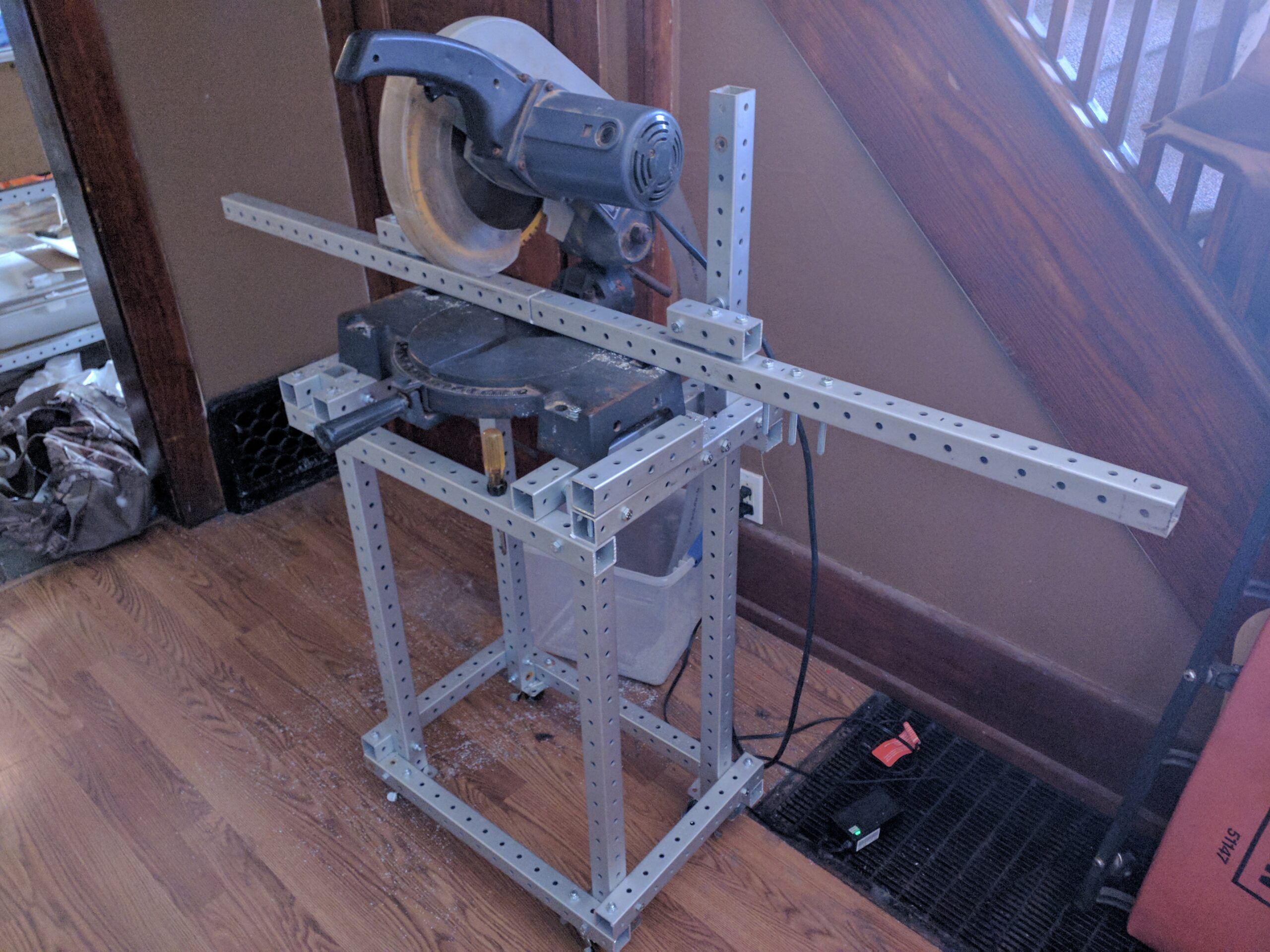 Profile
Replimat frames are constructed of individual frame sections with a square profile or cross-section. All frame sections share the same profile, which is 1.5 inches (38.1 millimeters) across each side. Frames of larger or smaller profile sizes may be produced, and continue to work with all of the construction techniques found here.

Hole Pattern
Holes are centered on each face of the frame and spaced regularly in a repeating pattern at a distance equal to the width of the frame. This geometrical arrangement allows the frame members to reliably produce rigid joints in three dimensions.

Lengths
Frame lengths are intentionally limited to 2, 3, 4, 5, 10, 15, 20, 25, 30, 35, 40, 50, 60, 80, and 100 holes per side. These lengths have been chosen to allow for the creation of all necessary joint configurations (using lengths 2, 3, 4, and 5) as well as to allow for lengths with a center hole and lengths which are evenly divisible by two. The reduced set of lengths allows for improved reuse from project to project, easier identification in photographs and diagrams, and simpler production, handling, and shipping.

Nuts and bolts
Frame sections are joined together using three lengths of bolt, suitable for 1, 2, or 3 stacked frames and share a single size washer and nut.

Joints
Three frame sections can be joined with three nuts and bolts to form a strong three dimensional joint orienting each frame section perpendicular to the others.  Other joining techniques allow for triangular and hinged joints, which are sufficient to build several useful linkages including the Peaucellier–Lipkin linear motion linkage, Jansen’s linkage, leading link suspension, and more.